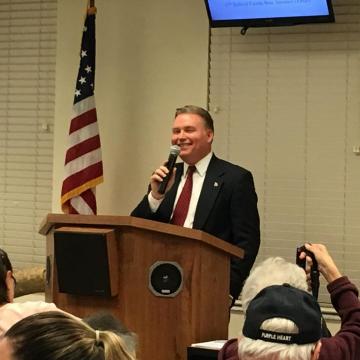 On February 27, 2018, more than 80 people filled the Jury Assembly Room at the St. Lucie County Courthouse in Fort Pierce for the second night of the Your Courts Up Close 2018 program. The topics for the evening included presentations from Lesley Norman and Tina Rel of the St. Lucie County Clerk’s Office and Thomas Bakkedahl of the 19th Circuit State Attorney’s Office.

Thomas Bakkedahl, Chief Assistant State Attorney, spoke about the functions and responsibilities of the State Attorney’s office, along with a quite spirited and engaged discussion regarding criminal prosecution and the Florida Death Penalty. It was clear through his presentation that he is passionate about his role and the role of the State Attorney’s Office in facilitating justice through the 19th Judicial Circuit Courts.

Based on participant engagement and comments received, the audience appreciated the presentations and enjoyed discussions with the presenters.

St. Lucie County Judge Isenhower, who developed Your Courts Up Close, was the host for the program and facilitated the question and answer periods throughout the evening. Thanks to Judge Isenhower for facilitating the program, to the presenters Lesley Norman, Tina Rel and Thomas Bakkedahl, and to staff from the St. Lucie County Clerk, State Attorney, Sheriff, and 19th Judicial Circuit Court Administration offices for their assistance in providing the program. The next Your Courts Up Close event will be Tuesday, March 6, 2018.

Your Courts Up Close Registration