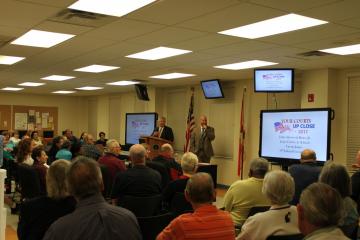 On March 7, 2017, participants filled the Jury Assembly Room at the St. Lucie County Courthouse in Ft. Pierce for the third evening of Your Courts Up Close. There were two presentations throughout the evening: one on family courts and one on the appellate courts.

Circuit Judges Sherwood Bauer, Jr. and Charles A. Schwab, who are both currently assigned to hear family cases in St. Lucie County, provided the first presentation. They started by discussing what a typical day is like for a family judge, including presiding over divorce cases and what factors they consider when granting a divorce. They also spoke of the importance of mediation in family cases, as well as family cases involving litigants who represent themselves. Participants asked the Judges questions about the daily aspects of hearing divorce cases, alimony, as well as the children involved with family cases.

Fourth District Court of Appeal Judge Burton C. Conner provided the next presentation on appellate courts and the role that appellate courts fulfill within the State Courts System. As someone who had previously been a County Court Judge and then a Circuit Court Judge in the 19th Judicial Circuit prior to being appointed as an Appellate Judge, Judge Conner was able to provide a unique perspective on the differences between a trial judge and an appellate judge. Participants asked Judge Conner questions about the work of an appellate judge and what factors appellate judges consider when making a decision.

Judge Daryl Isenhower hosted the evening and again helped facilitate the question and answer sessions. The final evening of Your Courts Up Close for 2017 will be Tuesday, March 14th. Judges from the 19th Judicial Circuit will provide a general discussion on various court topics.