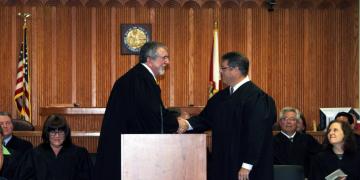 On the afternoon of Friday, March 3, 2017, an Investiture Ceremony was held for The Honorable Edmond Alonzo as the newest County Court Judge in St. Lucie County. The ceremony was attended by Circuit and County Court Judges of the 19th Judicial Circuit, and The Honorable Mark W. Klingensmith of the 4th District Court of Appeal administered the Oath. There were several presentations made to Judge Alonzo by the Martin County Chapter of the Florida Association for Women Lawyers, The Florida Conference of County Court Judges, The Justice Major B. Harding American Inn and of Court, and The Florida Bar Board of Governors. The Investiture Ceremony concluded with remarks made by Judge Alonzo in which he thanked his family and friends; he acknowledged that without their help and support, he would not have realized his dream of becoming a St. Lucie County Court Judge.