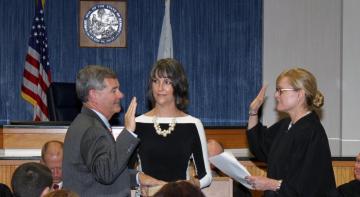 On the afternoon of Friday, February 17, 2017, an Investiture Ceremony was held for The Honorable Michael J. McNicholas as the newest Circuit Judge in the 19th Judicial Circuit. The ceremony was attended by 4th DCA Judge Alan Forst, Circuit and County Court Judges of the 19th Judicial Circuit, Senior Judges, a Magistrate, and a Hearing Officer, as well as elected officials from throughout the 19th Judicial Circuit. Speakers included The Honorable Bruce Colton, Bertram Saperstein, Terence McCarthy, and Thomas McNicholas. Chief Judge Elizabeth A. Metzger administered the Oath, which was immediately followed by a presentation to Judge McNicholas of his robe by the local Bar Associations. After this presentation, Judge McNicholas was invited by Chief Judge Metzger to sit with his fellow judges. Next came a stream of presentations by the Martin County Chapter of the Florida Association for Women Lawyers, The Justice Major B. Harding American Inn of Court, The Florida Bar Board of Governors, as well as a Principles of Professionalism for Florida Judges sign presented by Retired Judge F. Shields McManus that previously hung in his office for nine years. Through laughter and a few tears, Judge McNicholas provided remarks that focused on family and friends, as well as hard work and dedication. He was grateful for all of the people who helped him achieve his goal of becoming a judge.