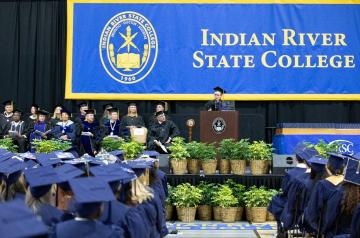 Indian River State College, located in Ft. Pierce, FL graduated one of their largest classes in the school’s history. More than 3,800 students were awarded degrees.

The Honorable Elizabeth Metzger, Chief Judge for the Nineteenth Judicial Circuit Court in Florida, served as the Commencement speaker for the May 2 ceremonies.

The Honorable Elizabeth A. Metzger of Stuart is Chief Judge with Florida’s Nineteenth Judicial Circuit Court. Appointed to the bench by Governor Jeb Bush in 2006, Judge Metzger has presided over cases in all four counties in the Circuit—Indian River, St. Lucie, Martin, and Okeechobee—handling juvenile (dependency and delinquency), civil, family cases, and felony cases. She has also served as the Administrative Judge overseeing the Appellate and Civil Divisions for the Nineteenth Judicial Circuit and acts as a mentor for new judges in the Circuit. In July 2015, Judge Metzger began serving as the Chief Judge of the Nineteenth Judicial Circuit. Prior to her appointment as a circuit judge, she was a law partner in Peterson & Bernard, concentrating in civil litigation. Judge Metzger graduated with honors from the Nova Southeastern University School of Law, where she received the overall Dean’s Award for Academic Excellence and the Florida Bar Trial Lawyers Section Award for Excellence in Trial Competitions. She earned her Bachelor’s Degree in English from Villanova University.