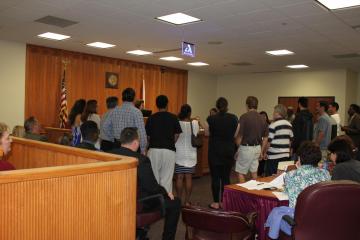 On Monday, March 13, 2017, Courtroom 1D at the St. Lucie County Courthouse was filled with Mental Health Court graduates, the team of professionals who assisted them, and their family and friends who provided support along the way. Circuit Court Judge Cynthia L. Cox presided over the ceremony and started by having all of the graduates, as well as the team members, introduce themselves. Additionally, the graduates introduced their family and friends that had come to share and celebrate their accomplishment. An alumni Mental Health Court graduate spoke and expressed how he felt that the Mental Health Court team felt like his support team and that he is “somebody today because of the help he received from the team.” Additionally, he encouraged those graduating to stay encouraged and to stay positive.

Judge Cox advised the graduates to ask for help when they need it and to know that today is just the beginning. She also told the story of a carpenter who was asked to build one final house before he retired. He did not put the same effort in building this house because he was tired and ready to retire, so the construction was not at the same level as the previous houses he built. Upon completion of the house, the contractor’s boss gave him the house as a way to express his gratitude for all of the years of hard work. The contractor then realized that he should have devoted the same effort to this house as he had with all of the other houses he had built. Judge Cox reminded the graduates that we must live in the houses that we build and encouraged them to build their houses wisely, in making good decisions every single day. At the conclusion of the ceremony, all of the graduates received certificates of successfully completing Mental Health Court and dismissal of charges, where applicable.