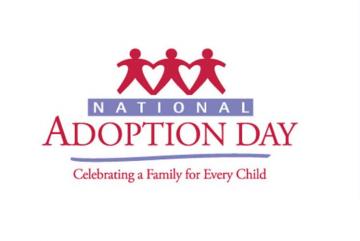 National Adoption Day is an effort to focus attention on the more than 125,000 children waiting to be adopted from foster care in the United States. The annual event was founded in 2000 by the Dave Thomas Foundation for Adoption, the Congressional Coalition on Adoption Institute, Alliance for Children’s Rights and Children’s Action Network.

National Adoption Day is celebrated every November 23rd during the week before Thanksgiving and it provides families an added reason to be thankful. Events are held all over the country to celebrate this holiday — during which communities and courts join efforts to find the right families for children in the foster care system.

Courts in more than 400 cities across the U.S. participate in the event, with 75,000 children being adopted from foster homes since the National Adoption Day started.

In the Nineteenth Judicial Circuit, Judge Meadows addresses the audience and discusses the significance of the bears during the “Big Give 2019 - Adoption Bears” effort.